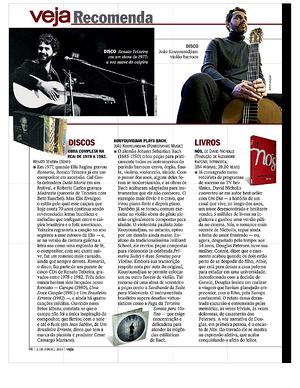 The German Johann Sebastian Bach (1685‒1750) composed pieces for practically every instrument of the Baroque age: harpsichord, organ, flute, violin, cello and lute. However, some of these pieces were updated with the passage of time and Bach’s compositions have been adapted for instruments he never knew. The most obvious example is the harpsichord which became the pianoforte and subsequently the piano, but it has become common to perform works on the guitar that were originally composed by the German genius for lute.

Nonetheless, São Paulo-born guitarist João Kouyoumdjian has set himself an even greater challenge. An alumnus of the distinguished Juilliard School, he has re-created works composed for cello (the celebrated Suite No. 1) and two violin sonatas. Although his transcription respects the original work to the note, Kouyoumdjian allows himself to impart a guitar flourish from time to time. This technique affords a serenading soul to pieces such as the Sarabande of the Cello Suite. The Brazilian guitarist overcomes such virtuoso challenges as the Fugue from Violin Sonata No. 3 which requires extreme concentration and delicacy to meet the stylistic demands of playing Bach.