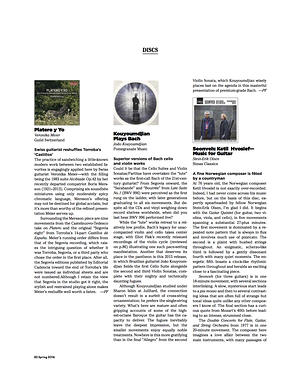 Could it be that the Cello Suites and Violin Sonatas/Partitas have overtaken the “lute” works as the first-call Bach of the 21st-century guitarist? From Segovia onward, the “Sarabande” and “Bourrée” from Lute Suite No.1 (BWV 996) were perceived as the first rung on the ladder, with later generations graduating to all six movements. But despite all the CDs and vinyl weighing down record shelves worldwide, when did you last hear BWV 996 performed live?

While the “lute” works retreat to a relatively low profile, Bach’s legacy for unaccompanied violin and cello takes center stage, with Eliot Fisk’s recently reissued recordings of the violin cycle (reviewed on p.86) illustrating one such pace-setting manifestation. Another that deserves its place in the pantheon is this 2015 release, in which Brazilian guitarist João Kouyoumdjian fields the first Cello Suite alongside the second and third Violin Sonatas, complete with their mighty and technically daunting fugues.

Although Kouyoumdjian studied under Sharon Isbin at Juilliard, the connection doesn’t result in a surfeit of cross-string ornamentation; he prefers the single-string variety. What’s here are mature and often gripping accounts of some of the highest-octane Baroque the guitar has the capacity to deliver. The fugues inevitably leave the deepest impression, but the smaller movements enjoy equally noble treatments. Nowhere is this more gratifying than in the final “Allegro” from the second Violin Sonata, which Kouyoumdjian wisely places last on the agenda in this masterful presentation of premium-grade Bach. —PF